The people of Welton are plagued by strangely determined wolves, and as food begins to run low the village council sends out a desperate plea for brave adventurers to destroy the beasts.

Is the job as easy as a walk in the woods, or is there more to the Wolves of Welton than mere animal cunning? There’s only one way to find out…

The party’s attempt to grab an afternoon of downtime is interrupted by a sheep equipped with a Scroll of Speak to Animals, dragging them into a magical grudge match that will test their strength, courage and willingness to endure baa’d puns.

The very first adventure produced by Winghorn Press, this version had been updated with player suggestions and feedback, as well as a brand new map and different enemies.

When the party is hired to investigate a haunted castle, they’re drawn into a tale of hatred, love and betrayal stretching back more then 300 years.

Will they be able to free the ghosts haunting Arevon Castle, or will they find themselves just another footnote in its long history of misery? 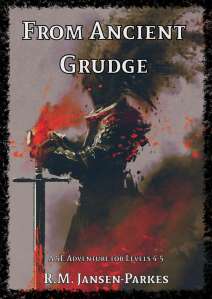 While searching for a series of missing people in the Galago Hills, the party comes across a cave decorated with disturbingly life-like statues.

What lurks in the cave isn’t anything as simple as a monstrous basilisk, however. After all, what evil could possibly be as dark and dangerous as that which lurks in the heart of mortal men?

Written by best-selling DM’s Guild author R.M. Jansen-Parkes, The Carver’s Cave is an adventure like no other. It plays on the party’s assumptions and challenges their problem-solving ability like never before.

When the party stumbles across a ragged, beaten band of knights they are amazed to hear that the hardy veterens were just soundly whipped by mere kobolds.

The crafty little fiends have set up in the rubble of a fallen Earthmote thought to be home to a long-dead dragon and – more importantly – its horde. When the Sable Spears charged in to drive them out, however, they were confronted with ambushes, traps and a whole lot of pain.

Dare you venture where the Sable Spears failed, and explore the Low Crater in search of treasure, glory and adventure? Or will you be turned aside by the prospect of fighting mere Kobolds?