The Open Legend system approaches character creation in an (appropriately) extremely open fashion, allowing for all manner of weird and wonderful builds.

Here are three interesting takes on familiar archetypes that we’ve thought up in recent weeks.

This character is built around doing one incredibly cool thing – taking out multiple enemies in a single turn, and looking awesome while doing it.

A graceful assassin, Shan’Varn darts between the shadows of the enemy’s lair using the Teleport boon, which automatically succeeds thanks to the Boon Focus feat. She carefully stalks her prey before descending on them with a single deadly katana blow.

So far this is fairly standard assassin fare, but Shan’Varn’s special abilities really come in to play when she and her allies have to deal with multiple targets at once. Using her Combat Momentum and Follow-Through feats, if she takes down one target she can instantly teleport to another and launch a fresh attack.

Both the teleportation and the attacks are free actions, so in theory there’s nothing stopping her from cutting through an entire legion of enemies in a single go if they’re weak enough and she rolls well enough.

Admittedly, unless she is facing off against particularly weedy guards it’s rare that she’ll get to take out more than one per turn, but when the dice fall just right and she drops both guards on either side of the watchtower in a single graceful action it’ll all be worth it.

One of the things I really like about Open Legend is the way it allows you to create characters that simply wouldn’t make sense in most other games.

For the most part, fighters are expected to be on the more sluggish side of things when it comes to mental agility, especially if they’re going to have effective combat stats. Lykos Trenmeyer is an exception to this rule, filling the roles of both combat bruiser and medical support as needed. 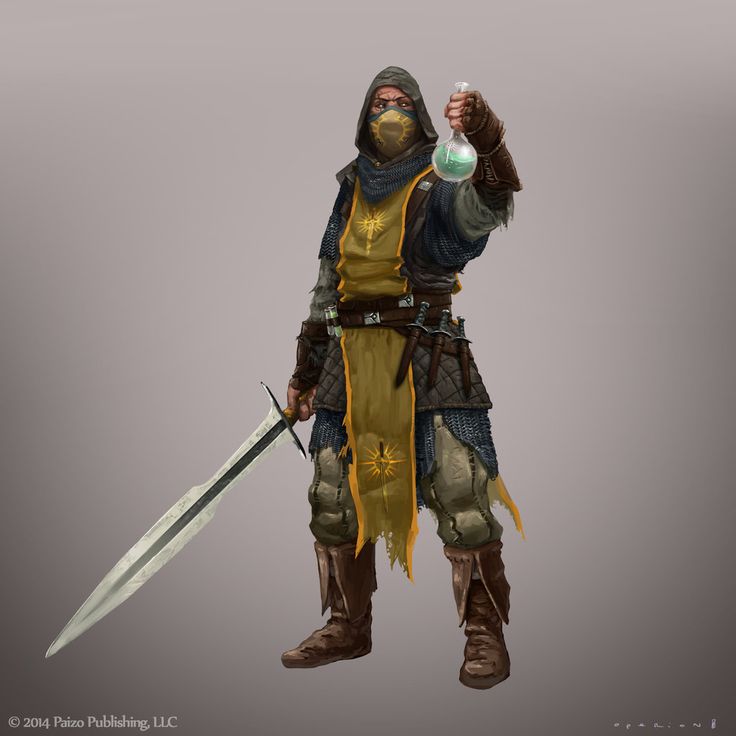 In my mind, Lykos was a traditional doctor before being dragged into the military. Though he never amounted to an exceptional warrior he can still more than hold his own against most opponents, while his skill at patching up his comrades in the midst of pitched battle earned him respect and admiration.

With his war days behind him, it must have taken something mighty important to get Doc Lykos back in the field…

Mechanically speaking, I decided to focus on the medical aspect of his training, making him exceptionally skilled at healing and an expert in all things medicine through the Knowledge feat. While he is not particularly specialised in combat, his generally good physical attributes mean that he should still be an effective member of the party when he doesn’t have anybody in need of a top-up.

If you’re looking for a more rounded combat medic it may be a good idea to drop the Knowledge and Disease Immunity feats for something like Martial Focus, but I like the idea of making Doc Lykos as much of an expert as possible.

Who says that the smart guys can’t be tough too?

One of the most interesting feats in Open Legend is Attribute Substitution. This essentially allows you to use one mental, social or supernatural ability score in place of a physical one.

The heroic Breaker Filwitch uses this to create a burning longsword that can either send out fireballs or clobber her foes. This allows her to make up for a lack of physical strength (Might) with the roaring power of the flame that burns within her (Energy).

It’s already simple enough to use Energy to make attacks, but the Attribute Substitution allows us to use it with a weapon. If we were feeling like min-maxing it may make sense to use an ability that can’t already be used in combat, such as Logic or Presence, but neither of them allow us to charge at people with a firey sword, and it’s hard to put a price on that.

Deciding on the rest of her skills was a little trickier, but in the end I decided to go with respectable physical stats; a bit of Presence to add in the feeling that she is an inspiring, heroic sort; and Movement, so that she can pull off a few crazy leaps straight out of the pages of a comic book.

The rules for Open Legend are completely free, so even if you’re on the fence it’s worth taking ten minutes to check them out on their website.

Those who like what they see and want to support the project can still get in on the game’s Kickstarter, which is running until the early hours of November 20th and includes a whole host of extra goodies including PDF and print copies of the rules and a brand new setting put together by some rather famous names, including Critical Role’s Matt Mercer and RPG legend Ed Greenwood.