Last month’s release of Volo’s Guide to Monsters provided lots of juicy nuggets about some of the most iconic D&D races. Among these were rules for playing monstrous PCs, which allow us to roll up one of the weirdest but most enjoyable characters of all time – the Goblin Barbarian.

At first glance it seems like this should be a truly terrible idea. Barbarians are traditionally tall, physically imposing and brave to the point of recklessness, while Goblins tend to be scrawny, somewhat pathetic and legendarily cowardly.

Fortunately, the flexibility of the 5E ruleset means that the mere fact that you’re three-foot tall and skinny as a rake doesn’t have to stop you from becoming one of the fiercest warriors out there.

This character is going to be used as a pregen for an adventure I’m writing, and will be coming in at level 5. By this point he has access to pretty much all of the iconic class abilities that make him a deadly fighter.

A quick glance at the character sheet should make it pretty obvious that Gung isn’t going to match up with a standard Half-Orc Barbarian when it comes to two-handed murder-smashing. His strength isn’t going to be maxed out until level 12 and as a small creature he can’t use heavy weapons like greatswords and mauls.

While his raw damage output may not be as high as it could be – though it’s still pretty darn good – Gung makes up for this by being incredibly survivable. 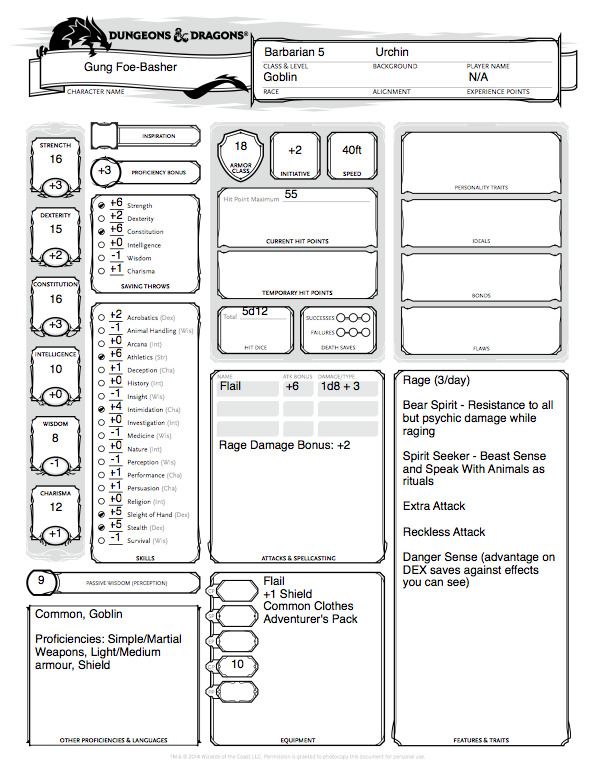 According to the stats in VGtM, Goblins get a natural +2 to Dexterity and +1 to Constitution. Using the standard array we can assign the 15 to CON, the 14 to STR and the 13 to DEX, leaving us with scores of 16, 14 and 15 respectively.

By grabbing a shield we can end up with AC17 and 15 hit points at level one, which combines with Rage’s resistance to standard weapons to make Gung an incredibly tough cookie. A flail isn’t quite the most effective weapon – longswords and battle axes do the same base damage but can be two-handed to boost it to a d10 – but it’s nice, flavorful and plenty of fun.

Fast-forward to fifth level and we’ve used the level four Ability Score Increase to increase his offensive abilities somewhat. We’ve also sent Gung down the Path of the Tomem Warrior and grabbed the Bear Spirit to increase his defensive abilities even further. By this time he’ll have 55 hit points and resistance to virtually all damage while raging, plus we’ve given him a +1 Shield that boosts his AC to 18.

As well as being one of the toughest characters it’s possible to have at this point of the game, Gung is no slouch when it comes to dishing out the hurt himself thanks to the damage bonus from rage and his extra attack. With average rolls on both sides, Gung can handily defeat an Orc Warchief in single combat – rather a nice achievement for a lowly Goblin.

By their very nature adventurers are supposed to be unusual members of their society, and this is especially true when it comes to those drawn from monstrous races. Fortunately, this completely fits in with the idea of a Goblin Barbarian.

Perhaps he grew up on the fringes of a human city, sticking to the shadows and stealing to get by before rising up to defeat something that threatened his home, finally earning a degree of respect and acceptance. Maybe he was taken in by a Dwarven warrior who cleared out a Goblin lair but couldn’t bring himself to strike down a newborn child, so raised the young creature in the ways of his own people.

Of course, he needn’t have any connection to the so-called ‘civilised’ races at all. Gung may well have been raised in the slums of a mountain stronghold, or the ruins of a city conquered by a marching horde of Goblinoids.

In any case, the fire of a Barbarian burns within his scrawny breast, marking him out as different from the rest of his kin.

Will this set him on a path towards heroism or villainy? We’re not sure, but finding out sure is going to be fun…